Quick Unity Tip: Res Up And Decompress Your Skyboxes

Normally I don't notice these kinds of things, but maybe I'm leveling up in Artist, because I was wondering why the skybox in my level looked so pixelly and banded. It was actually made up of 1024x1024 source textures, so...why? 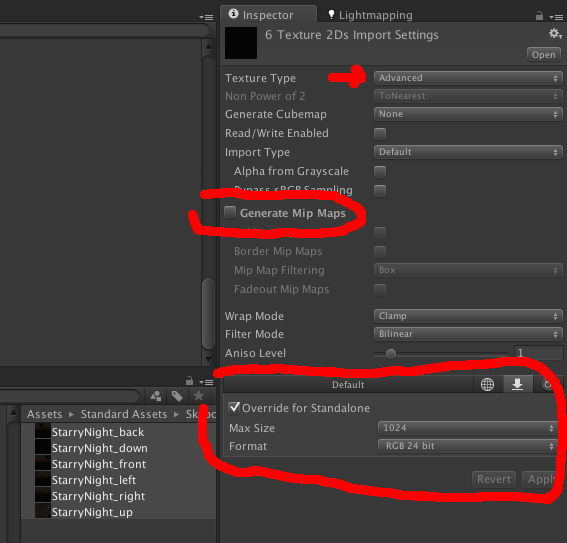 Turns out they default to 512 width max, and lose a lot with compression as well. Override For Standalone, 1024 Max Resolution, Format Truecolor. Much better. Still banding but I think I can live with that. But so much memory for a skybox seems extreme even in this day and age. I managed to get the memory usage down some with Texture Type Advanced, Generate Mip Maps off, Format RGB 24 bit. Still seems extreme, but maybe that's just because I'm old. (And 512x512 is probably fine for a skybox that doesn't have tiny stars...)

Want some glowy swirly psychedelic smoke in your game?

I had fun playing with perlin noise and shaders to make the various procedural smoke patterns for sixty second shooter and last week brought the same tech over to Energy Hook - but before I did, I looked around the Asset Store to see if there was anything that would do the same effect. There was, but it was all at least $50 or more, and didn't feel like paying it. So I did the work - took me longer than I expected to figure out ShaderLab - and here's the result.

And then I thought, hey, I would have paid $10 for that. So why not put it up on the Asset Store and see if I can sell any?

It's not the most powerful or flexible procedural smoke generator in the Asset Store, but I'm pretty sure it's the cheapest.

Why is the Unity Asset Store so much more pleasant than the Windows 8 Store? Well, it's curated, so there isn't a lot of utter crap in there. (It's tempting to download every single free asset.) It's sortable by a variety of parameters (such as price.) It's easy on the eyes - partly because it's curated (there aren't infinite results splitting your attention) but partly because the graphic design is better IMO.

Submitting an asset wasn't hard - about as easy as putting an app in the Chrome Web Store - and seemingly much easier than submitting something for the Windows 8 store. And it was accepted on my first try, so yay.

I'll keep you posted how it's selling. Although I doubt one could make a living out of selling stuff in the Unity Asset Store unless it was something crazy popular that almost everybody needs, like nGUI, there's a chance it could provide decent alternative revenue if you're selling stuff that you would have made anyway for your game - then it only has to pay for the effort to get it into the store to make it worthwhile (but mustn't forget to include the opportunity cost...) We'll see.

On the technical side, if you want an effect like this and you're too poor to pay the $10, I'm here for you, since you're a valued reader of my blog. This is where the magic happens, the Cg that I brought over from sixty second shooter:

The texture it looks up into should be a perlin noise texture with different frequencies of noise in each color channel. It uses the RG channels to then look up into the texture a second time, and then blends that noise together. But it does interesting kaleidoscopic things with normal textures as well. You'll have to wrap that in ShaderLab stuff to get it working in Unity, but it should work more or less as-is in engines that use straight up Cg (like Playstation Mobile.)

Enjoy! If you buy it, feel free to ask questions right here in the comments.

It's programmer art time! Check out these "augmented reality" elements on the HUD in Energy Hook - (the idea that you have AR challenges is inspired, of course, by Arkham City. Hey, everything's remix, right?)

Paul's busy modeling buildings and I didn't want to distract him from that, but I also wanted the UI to look passable, but I didn't want to spend money, so I decided not to go with these and see if I could make my own. After Googling around I found a video on how to make hud elements with Gimp, where the comment said, "Wouldn't Inkscape be better?" So I decided to try Inkscape. It took a bit to get Inkscape running on my Mac, because it uses X11, so I had to install XQuartz and the key step I missed was restarting the machine.

A few hours of tutorial and experimentation later, (and touching up in Gimp) I had this:

So what is that?

That uses Inkscape's Tiled Clone feature. There's a more thorough description here, but by setting the offsets so the tiles stay in the same place and you only change rotation, you can make all sorts of gauges and whatnot. The hash lines are 2 "rows" of 8 "columns" of a line segment, rotated 120 per row and 10 per column. The wedges are a circle segment rotated and randomly scaled (if Scale X and Scale Y match it seems to be smart enough to scale each wedge the same amount by the same random factor.)

Had to touch it up a bit in Gimp - then in Unity mapped it onto a cylinder, used the Particles/Additive shader, and put a glow on the whole thing.

Programmer art's all right with me.