The Best Game I've Made In Seven Days And Lessons Learned

I heard about the Ludum Dare 7drts just a couple days before it happened and said, "Why not?" After checking on Facebook to see if people who are avidly waiting for Energy Hook would be pissed off, asking my wife if she could maybe do a little extra childcare that week, I committed.

What came out at the end?

Orchammer 1944: Nazi elves want to exterminate us Orcs, and we have to fight back with hammers and tanks. A session takes a couple minutes - the whole thing takes a couple hours.

I've done quick games before, but of all the games I've made in a week or less, this is the best.

So what did I learn?

I livestreamed most of my work. You'd think it would be a distraction, but livestreaming works even better than Stay Focus'd and Rescue Time at getting me to focus. As long as someone is watching me, or even might watch me, I stop reading e-mail, using social networks, and even put off going to the bathroom. It's the benefits of pair programming without having to spend a second programmer on it. It makes me want to stream my work on Energy Hook much more frequently, and I wonder if it scales - could every member of a larger studio stream at the same time?

Improv theater has a thing called "Yes, And..." which I learned about from my tabletop RPG playing and these books. The idea is a lot of us have a tendency to shoot down ideas that aren't ours. It's our first reaction. A book on parenting sensitive children that I read even has a name for it: 'bad first reaction' - anytime somebody suggests something the default is to say no. That's my daughter, and me, but thanks to my tabletop RPG playing I'm learning to get over it. I look back at ideas I shot down during my videogame career and ask myself, "Why did I shoot that down? It would have added to the game and in its absence it wasn't like something rushed in to fill the void and make it better."

I did a lot of Yes, And... over the last seven days. I started with an existing RTS framework. The people watching the stream gave many suggestions and feedback and I believe I incorporated most of them - and in particular, Mark Nau gave me the title, and a document on his ideas for the macro game - which I didn't finish to his specs but I feel it turned the game from something I could enjoy for 5-10 minutes into something I could enjoy for 2-3 hours.

I Almost Can't Ask For Feedback Too Early

It's super-tempting to say, "I know this has problems so I'm going to fix them before showing it to people." After all, what's the point? They're just going to point out the problems I know I already have and I'll be like, "Yeah, yeah, I know."

So there's a couple of problems with that logic:

It was tempting to scope my game so that the first playable isn't ready until day 6 or 7. Instead, again at Mark Nau's advice, the first thing I did after I had the tech up-and-running was make a game out of it by adding some creeps and giving it a win and lose condition. That way I was able to ask for feedback on Day 3.

Do Looks Matter? Why Yes, They Do

I could have made the game with the existing art in the framework and some cubes and spheres and just worked on game mechanics all week, but instead decided I wanted to spend at least a day on art so I'd have something at the end that looked finished rather than prototype-y. I let people vote on my ideas for the look - and the votes were pretty split, with the "Ed Emberley" style winning.

I wasn't totally consistent about it, and ended up with some outlined orthographic 3d pieces mixed with some Ed Emberleyish 2d pieces but pretty happy how it turned out, and want to do an RPG with a similar look in the future - like pixel and voxel art I think a look like this has its own charm, is super-easy to produce, and opens up lots of opportunity for modding and customization - without being tired, like pixel and voxel art. In the future, I'd model the characters in a 3D package instead of using bitmaps. 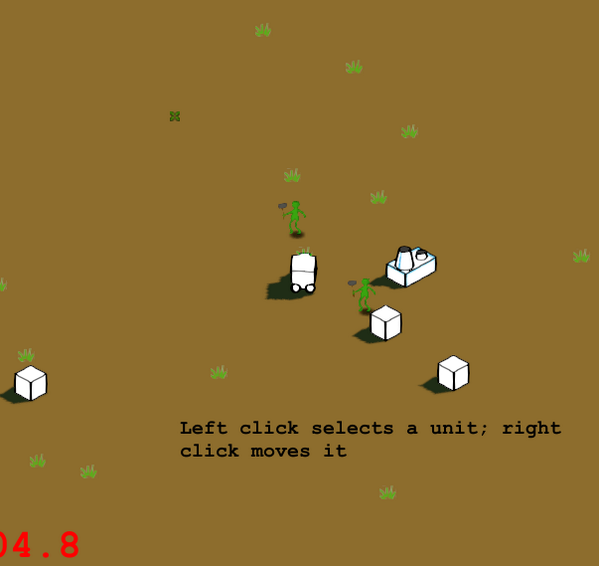 Also, by choosing a look, the game really started to take shape. Once I knew there'd be Ed Emberlyish humanoids, I knew there'd be orcs. But there were also tanks. Tanks and orcs? Why, it's a WW2 - fantasy mashup. And then Mark suggested the title and I knew what the game was. Though it was a day later that I realized it made more sense for the Elves to be the bad-guys.

And, this is a no-brainer - while I might wish that people could appreciate a game by simply looking at its abstract math, they don't. Going by the 'number of twitter / facebook comments' metric as an index of a game's remarkability, the new look drove a lot more interest in the game.

When looking for plug-ins, code, whatever for Unity, there's a lot of stuff out there that people haven't bothered to put in the asset store. I went straight to the asset store for RTS technology and wouldn't even have found what I ended up using if it wasn't for Twitter. Googling also got me the blood splatter tech I used.

I lost most of the first day by starting with a framework that, after getting it up and running and making some progress, I decided I simply didn't like. Though I'm not sure if this is an example of What Went Wrong or if I did the smart thing in abandoning that package and switching to the other one. The only real way to evaluate whether you like some middleware is to work with it for a while; if you have two choices there's something to be said for switching mid-stream just to see what you're missing. Could I have had the foresight to realize that the first package wasn't for me? <shrugs>

In the final analysis, this game is pretty cool for a gamejam but isn't going to set the world on fire, as it is. Which is fine ... expecting every gamejam to produce a Tower of Goo, Receiver, or Canabalt would be silly ... most of us will go our whole lives without a gamejam of that caliber ... (but I can wish, even though I've already been lucky enough to come up with one pretty cool game mechanic in my life.) When I do another game jam, I wonder how I can tap into something deeper, go more creative / innovative, mine that undiscovered country where crazy things like Starseed Pilgrim and Tower of Goo come from - or if it's really a numbers game, where I have to make a lot of shots on goal to finally come up with something truly remarkable.

Posted at 08:35 AM in Free Game, I heart Unity, Manager In A Strange Land | Permalink

BTW - I've been asked what I used to stream - it's XSplit Broadcaster.