I didn't bother to back Wasteland 2 because they'd already made their nut, but I just heard that Chris Avellone will do a chunk of writing iff they make 2.1m. Chris is good people - a lot of people claim that Planescape: Torment is their favorite game ever because of his writing - and at Obsidian he hasn't done as much game writing as he used to, so let's pull him back in!

I Want To Kickstart Something - Artist Needed

Kickstarter is awesome. The people who invented it deserve all their success. Wow! People are making games and don't have to take that big risk - "Should I put all this effort in only to discover that nobody wants to buy it?" - people are testing the waters - "Does anyone actually want this?" - and doing it without dealing with publishers.

Hell, I want to Kickstart everything now.

Obviously, there's no way a publisher would greenlight this. ("Let me get this straight. You basically want to make a game like Spider-Man 2 ... without Spider-Man?"  "Um ... kinda?"  "Next!") And maybe nobody but me actually wants it. But Kickstarter will let me find out, without taking too much of a risk.

I've already started prototyping a swinging mechanic in Unity, and am amazed at just how much faster it's going than when I programmed up Spidey's webswinging in 2002. I don't need to go down certain dead ends - last time we marked up the terrain with points for the lines to attach to, only to eventually decide that it was more fun to arbitrarily raycast into the geometry to find the points. So I don't have to waste time marking up terrain. I can block out obstacle courses in Unity extremely rapidly - back then I had to struggle with Max, import the terrain, and write a page long INI file to get a level into the game. Last time I had to work against the existing code-base, taking out all of the lines of code that killed the hero's momentum - this time I'm building up instead of tearing down. I'm at least an order of magnitude more productive!

And the whole game can be done over an order of magnitude faster. Making sixty second shooter taught me a thing or two about rapid development. About keeping scope down, taking the shortest path to 'ship it', about necessity being the mother of invention - before sixty second shooter I used to think that you couldn't make a game in less than eighteen months unless it was a sequel. If the game focuses entirely on the swinging, and it's single-player, and we have a smaller, more abstract, world to explore (sure, New York was big - but didn't it kind of feel mostly all the same?) - I believe that if I teamed up with one artist, we could do it all in under a year.

There's the rub, though: the 3D artist/animators I know have jobs or are otherwise occupied.

So I'm putting the call out. If you know a can-do-it-all artist - concept, modeling, texturing, and animation - who might be interested in spending a year or so making a game they can call their own (with equity, of course!) - put them in touch with me. (jdfristrom@gmail.com) There's almost no risk - one piece of concept art, of the main character, might be enough to sell the project. We might not even need that. We can work remotely, so no need to relocate. If the Kickstarter doesn't get funded, not much skin off anyone's nose. If it does - well, then we actually have to finish the game - and we'll talk about that, to make sure we don't commit to anything impossible. 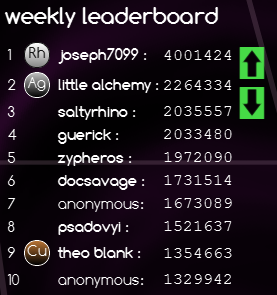 I think Joseph's just toying with us this week.

The Good News, if you've noticed that sixty second shooter was crashing - it's  not crashing anymore.

The Bad News is it's over quota and I don't know when Google is going to let me upgrade the billing - so even though you can play, you can't get on the leaderboards. (Until tomorrow when it resets - but then by the end of the day it'll probably be over quota again.)

(More Good News is I guess it's kinda popular?)

sixty second shooter was intended to be the sort of game that rapidly induces a "Csikszentmihalyi flow state" - that state of mind where the player is focused on just the game and the rest of the world fades into the background - and also to cause frequent heart-racing adrenaline rushes, by mashing up the retro ‘twin stick’ (although sixty second shooter uses keyboard and mouse) arena shooter genre with the sixty-second time limit games popular on Facebook.
Like the hardcore shooters of yesteryear, repeated plays build player skill, reflexes and hand-eye coordination; but the strategy is not as simple as shooting anything that moves: understanding of the game mechanics are required to maximize your score. In fact, if you excel at the game’s strategy, you can keep the game in a slow-motion mode that ‘levels the playing field’ - so someone with mediocre hand-eye coordination and reflexes (like myself) can still earn a top spot on the leaderboard.
sixty second shooter was also intended to be a perfect low-friction 'coffee break' game; a player with only a few minutes of spare time can open their browser and, after a nearly instantaneous load time, are playing a short game that they know will be done before their next appointment. They can get in, improve their standing on the leaderboards, and get out.

Film has a couple tricks to add weight to a moment. Say someone gets shot, or there's an explosion. You film it and play it back and there's not much oomf there. So the movies film the same explosion or car crash from several angles and play it back to us 1-2-3. We're so used to this cinematic trick we don't usually even notice, we somehow see it as one explosion. But that's not all that easy to do in a videogame. Possible, sure, but not easy. Not as easy as IRL anyhow. So we use movies other trick: slow motion.

Slow motion in film doesn't just help add weight to a moment, though. Came across a thing recently in Johnstone's Impro where he pointed out that making the hero move in slow motion confers status to them. There are many things we're wired to imagine as high-status, and one is people moving slowly. A minion or lackey may hurry to get out of the way or fidget with anxiety, but a king will take their own sweet time. Thus the slow-motion scenes in movies.

There are still other reasons I love time dilation. (I won't call it 'bullet time' since the term has been trademarked or copyrighted or something.) One of which is it can turn a twitch game that my forty-something-year-old reflexes are hopeless at into a strategy game - it makes Viewtiful Joe and Spider-Man and sixty second shooter accessible to me.

But even if you don't have a specific time dilation power-up or mode or button in your game it's still useful to have time dilation built into your engine. Consider the 'freeze frame' you often see in a fighting game after a good hit - it adds additional feedback and weight to the moment. A 'freeze frame' is usually implemented as time slowling down a lot for a very short period of time - because if time actually stopped you might get some divide-by-zero errors with your delta t. For a fight game in particular, this is something the designer is totally within their rights to expect the programmer to provide. (Because it should take them, like, two minutes ... though it might take a lot longer to then provide the hooks for the designer to get at it.) And even without a freeze-frame, adding that weight-to-the-moment for the awesome combo or the kick-ass weapon or stealth takedown can be done with good old slow motion.

Joseh must be getting bored - nobody can compete. 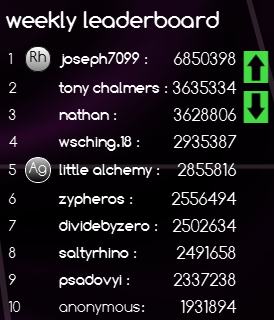 Dennis Scimeca has been converted. (And says some really positive things about me as well.)

New Game In The Works

You heard it here first. Miguel Sternberg has set up this Comics vs. Games exhibition in Toronto, teaming up comics artists with game developers to make comics-influenced-games or gamey-comics.

So I'm working with Steven Manale, creator of Superslackers, to make a game - working title We're No Angels! - about dead rock stars trying to escape from Heaven.

Still wanting to put this up on the web with Native Client when I'm done, I started out using my old tech, then decided to switch to using Ogre - and that, for me, was a very unhappiness-inducing experience.

Meanwhile, I've been showing Unity to my students at Digipen as a way to introduce them to a variety of game-technology concepts, and I'm crushing on Unity more and more. I've been leery of using it because I worried about whether it would be able to handle the sort of n^2 flocking algorithms I'm likely to have in a top-down shooterish game. So I put it through its paces - and I'm sold; that's 150 enemies all iterating over each other. (Gamepad required.)

And that is also a very very very very rough draft of We're No Angels! there. I'm having trouble finding time to work on it - I've started thinking of it as being a 48-hour game jam, just spread over a couple months ...

The one thing I've discovered that Unity Free is missing is postprocessing on the frame buffer. Apparently that's only in Unity Pro. Oh well.

As you can probably see (unless you're running an adblocker or looking at this through an rss feed), I broke down and put adsense on the blog. Hey, if it monetizes as well as sixty second shooter, free money.  Should pay for what I'm spending on typepad and then some.