My wife's more successful than I am

My wife opened an Esty shop, CatShyCrafts, about the same time I launched sixty second shooter. She's made more money with it than sixty second shooter has ... and just made the front page of the Etsy newsletter, which is huge, sounds like the Etsy equivalent of being featured in the iPhone App Store.

As you can tell, I'm jealous. But proud at the same time! Prealous. Joud.

Edit: (Cathy pointed out there's some implied sexism in this article - by pointing out that my wife's more succesful than me, I imply that the status quo is the reverse. But my main thing was really the disparity in experience! Anyhow. I also conflated money with success, as long as we're pointing out things I'm doing wrong.)

Tournament Results and The Promotion Ends

And it's the last day for the holiday promotion - if you want to buy energy at the cheap prices, do it today!

Part of me didn't want to make a trailer - because it takes almost less time to install and play the game than it does to watch the trailer. But EVERYBODY said I should. So I did. Ta-dah!

I really should use a monospace font for the leaderboard. I tried, I just haven't taken the time to figur eout why it didn't take.

So - proof that you can still win without spending energy - and I assume that's the designer of 'little alchemy' there, in the top named spot. And me, I can't seem to even beat my brother. 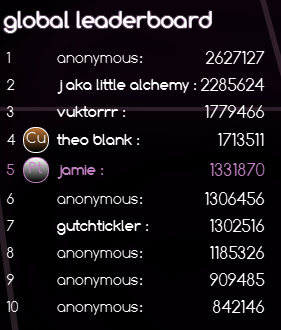 Oh! Almost forgot to comment on how momentous this was - jumsimbab87 didn't win for a change! But ... that's because he didn't play. If he and little alchemy throw down that'd be something.

Or, part of last year, because my memory doesn't go back that far.

Enslaved - Great character animation, particularly in the faces. May be the first time I've seen exasperation in a video game.

Mass Effect 2 - I felt manipulated into doing these character missions, to get the bennies and because the main story arc hadn't advanced yet, but then found myself sucked in despite myself and making hard choices along with the characters. I was sorry when it was over.

Inside a Star-Filled Sky - I'd been meaning to play this ever since I saw it at GDC, but didn't get around to it until December. Does things to your mind.

Desktop Dungeons - This exercises a part of my brain that I love to exercise. Flow. Happiness.

Deus Ex 3 -  By combining Gears-of-Warish cover mechanics with stealth, it brings a new clarity to the stealth game that I haven't seen before.

Blueberry Garden - A very pleasant way to while away part of an afternoon.

Fruit Ninja Kinect - Pretty much the killer app for the kinect, IMO.

Little Alchemy - I mentioned that one in a previous post - my daughter and I kept coming back to it and have gotten close to finishing, although seems like they keep adding more stuff. (And they're fond of sixty second shooter, too - somebody over there topped our leaderboards.)

What about you? What were your highlights of last year?