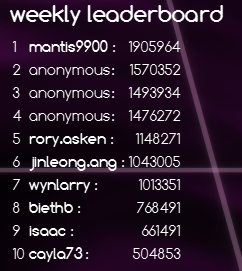 Posted at 09:48 AM in Native Client, sixty second shooter | Permalink

Not sure if this helps, but when I first ran 60 second shooter on my MBP it ran at a decent FPS. This was before you were doing text as HTML, and some time after you made that change the performance got dramatically worse. (I don't think it's actually related to the HTML change; I deleted everything but the embed tag via the inspector and the performance is still slow)

That helps! I can try to do the revert-code-till-it-works thing, though that will put the code out-of-sync with my version of nacl. I knew I should have checked everything in.

And I didn't know you could do that in the inspector. Cool!