So, last week, Isaac took the title of sixty second shooter world champion away from Tomo. What do you want for a prize?

This week, (before I even managed to get the update in) I seem to be leading the pack, but I'm not eligible for the nonexistent prize. One jvoung already has a pretty solid score, in the 200K range.

For me, this was another week filled mostly with stuff that was not-working-on-the-game.

But I did manage to get some window-filling goodness in there.  Ben Guildenstein's been asking for it for weeks and I finally did it.  (You see?  I do, eventually, respond to feedback.)

And, sorry Ben, it doesn't automatically go full-screen, but if you full-screen Chrome yourself (that's F11 on Windows) it's pretty sweet.

Or, if your framerate sucks, you can play in a smaller window and get some more performance.

And people with small monitors will be able to see the leaderboard now - it won't be wrapped off the bottom of the screen. 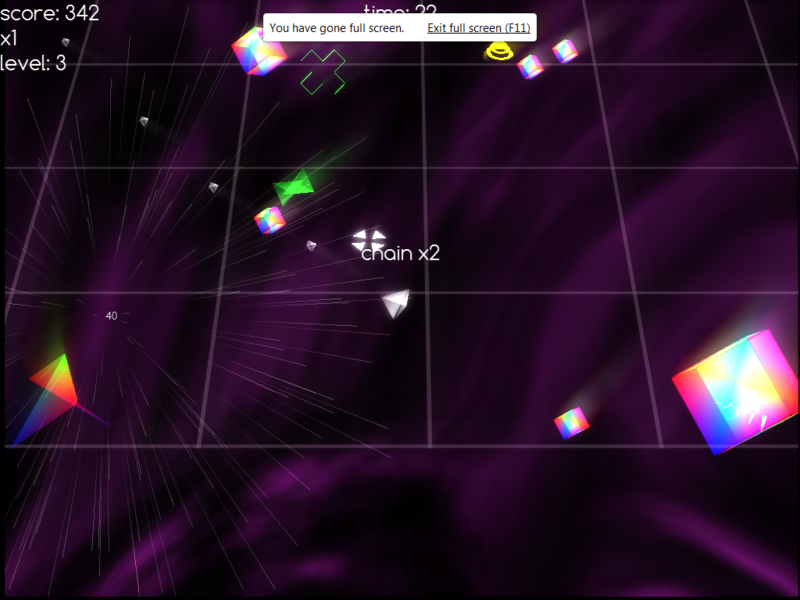 To do it, I had to spend what felt like a stupid amount of time mucking with CSS to more-or-less get the browser text to where I thought it should be.  It makes me miss the days when I only had to support 4:3 and 16:9. I should now probably write an article on CSS for NaCl / webgl / maybe even HTML5 games.

Wow, the game is so much fun full-screen! I seem to have a bit of a problem with my cursor not lining up with where my mouse is, but I can thankfully still play. My res is 1366x768.

The game runs very well on my Intel GMA in linux, so it doesn't need a very powerful card to have great framerates.

Yes, CSS is quite a pain... Your best bet is to use position:absolute, boxes inside of boxes, and try positioning with right:0px rather than left or float.

If you want some help positioning things, I can certainly lend a hand. (Good thing you don't have to work with IE or you would tear your hair out...)

Weird. I'm running on a MacBook Pro, Core 2 Duo with a dedicated NVidia chipset, and the game runs in seconds per frame instead. I've tried shrinking the window and setting the performance to high, and it still crawls. Any other suggestions?