Pardon me while I name-drop.  We had the chance to talk with Rob Pardo some at DICE and GDC, and from a couple of anecdotes I'm going to make a sweeping generalization - a reason Blizzard outclasses us is because the sorts of problems that I'm tempted to just make excuses about they actually solve.  The example from DICE was a discussion about ladder systems:  my feeling used to be "Use ELO" - like the true skill from Halo matches.  Rob Pardo doesn't think ELO is fun.  Which is the point where I start making excuses:  "It's good enough for chess, for Halo, it works, it matches you with someone at your level."

But he's got a point - ELO has a number of issues:
It's fun to watch your ranking go up at first, until you hit a plateau, at which point the game can lose interest unless you're one of those "love the plateau" people.  Again, I feel the urge to make an excuse:  At least it's fun at first!  It least it gives you motivation to keep playing for a while!
And whoever is the best doesn't want to play again, particularly if the game has some variance.  All that can happen is their score goes down.
(I've been playing Spectromancer a lot lately - I suck - but one thing they do notice on the system is that good players create new accounts for themselves so they can smurf - and have the fun of climbing the ladder again.)
I'm not going to tell you how Blizzard plans on solving these issues for Starcraft 2 - that may have been confidential.
One thing that isn't confidential, which was in Kaplan's WoW talk, is "progressive percentages."  It's something they use on the drops during a quest in WoW - if drops were purely random, you'd end up with a couple of problems:
First of all, people are pathologically bad at recognizing true randomness.  When you give someone a list of truly randomly generated numbers or coin flips, they'll see the streaks and often say, "That's not random!"  (How many times have you heard somebody say that about their mp3 player or CD changer?  Problem with random shuffles is often that they actually *are* truly random!  (Though I once had a CD changer in my car that I was so sure wasn't random that I took the trouble to write down every disc & track it played for a while and did a chi-square (well, I asked Mark Nau do the chi-square) and was vindicated - it really did favor a couple of tracks much more than the other tracks, statistically significantly.))
Second, some people, some of your players, will get screwed by randomness.  They'll get bad streaks.  1 out of 32 of your players are going to flip the coin five times and come up with "no drop" every time.
And they'll come to the programmer and say "Your random number generator is broken."  (Apparently in the early days there were a lot of these sorts of reports on the Blizzard forums.)  And here's where I make my excuse:  when someone comes to me and tells me my random number generator is broken I say, "No it isn't, you're just suffering from the all too human tendency to not be able to recognize truly random numbers."
But it doesn't matter if it's broken or not, all that matters is it *seems* broken.  And the guys at Blizzard fix it.  They don't want to lose that 5% of players who happened to get enough of a bad streak that they decided to quit playing.  But they want to keep some of the feeling of randomness in there.  So - progressive percentages.
Which work like this:  say you want an approximately 50% drop rate.  Instead of it being 50% every time, you make it something like 33% the first time, and if they miss, you make it 50% the next time, and if they miss, you make it 66% the next time, etcetera.  When saving the game from bad streaks you need to be careful you don't kill the good streaks as well.
Not technically random at all!  But cool, huh?  Blizzard doesn't even let the nature of random numbers mess up their games.  I tell you, next time I find myself saying to some playtester, "Yes, I understand you think there's a problem, but there really isn't, and here's why..." I'm going to have to give myself a good kick.

1) Rayleigh Light Scattering (whatever that is) looks better than standard hardware supported linear fog.
2) Spherized Normals (whatever that is) on trees made them look less dark.
3) Characters are lit by two hemispheres - a "sun" hemisphere and "ground light" hemisphere.
The Illustrative Rendering of Prince of Persia:  Ben Mattes & Jean-Francois St-Amour
To outline characters, they render twice, first time backfacing with a screen space expansion that artists can control to prevent moustaches.
To get an illustrative look, they do edge detection:  the screen is composited with an edge detection of the screen.  BUT they do not want characters edged, they just want things like, say, shadows of characters edged - so the characters mask themselves out of the edge render before its composited.
Going from a corrupt world to a sunlit world was mostly a color space transformation - during the transition, objects on the edge sampled a texture to decide which pixels were corrupt vs. uncorrupt.
Mixing Audio: Garry Taylor
1) There's focus again - the audio mix can focus players just like a light.
2) A useful tool, that Killzone 2 has, is being able to mix live while the game is playing and then save a snapshot of the mix.  Sure beats the hell out of quitting the game, going into XACT or whatever, rebalancing everything, then playing the game again - though as a friend pointed out - "Sounds good if your audio technician is your bottleneck resource."
3) Ducking music and audio when VO comes on?  Here's an idea - have the volume of dialog key into a compressor which the music / SFX go through.  I can't quite imagine what it would sound like, myself, but sounds interesting.
4)  Mixing audio should be on the schedule.  (That's my own note.)  Motor Storm took 3 days.
5)  Be able to trigger different mixes via events.
Pairwise Testing:
My main takeaway was "sounds interesting" and there's a website:  pairwise.org
Now Sofi wants me to play Peggle.

What I learned on my GDC vacation

So many people at GDC told me they like the blog that I felt guilty for not writing anything lately.  So here are my GDC takeaways.

Mostly we were pitching.  The game we're pitching, a new Richard Garfield game, has gotten the best response in pitch meetings I've ever seen - we may even be able to sell it on the design document alone.  I can't put my finger on why, but it's an idea that's both fresh and at the same time obvious, and it's something we can do for a relatively small budget, so maybe that has something to do with it.
I tended to go to sessions in topics I know nothing about, figuring I'd learn more that way.  So I went to some art and audio sessions. Not sure that's the wisest course of action - if I learn one thing in a design session, it's probably something I'll be able to directly apply, but if I learn a whole bunch of stuff in an art session, will I find a way to use it?
Focusing a player's attention was a theme in three talks I saw - a lighting talk, an audio talk, and Kaplan's World of Warcraft Quest talk.
The Iwata talk -
1) the prototype for Wii boxing was just made up of colored blocks.  YES!  This is just what I was on about at my leadership forum prototyping talk.  Gameplay first, art later, a necessary step on the way to vertical slice that too few people care about - they get hung up on art.
2) he made it sound like their kill rate was lower than I would have expected - saying Miyamoto games sometimes linger in the prototyping stage for over 2 years, that *sometimes* they get abandoned, but even then the experiment may show up in a later game.  Maybe the kill rate for Miyamoto games is lower than the average kill rate for other Nintendo experiments.  Anyhow, this is one of the ways Nintendo takes the sting off of killing a prototype - the feeling that it's not thrown away, that it might be brought out of the vault at a later date.
*Lighting With Purpose*, by Jay Riddle and Paul Ayliffe -
1) artists always have better slides than programmers
2) if you haven't started using global illumination, use it - if it's good enough for Hannah Montanna it's good for us
3) light is one of the many ways you can focus a player
4) lighting (and light color) should change as you go through level - for flow, to pull you through emotionally.  See Cinderella, the disney movie.  Turok had a "color script" for this purpose.
5) 4 F's:  form, feel, focus, flow.  (and PURE's 3 V's:  vistas, vertigo, verticality.  Next time I'm making a game design bible, maybe I should come up with a clever acronym or alliteration to get my vision across...)
6) Characters and world should have different lighting rigs / setups.  They said the same thing at the Prince of Persia talk.  It seems obvious now that they say it, but the last time I worked on a renderer I was trying so hard to make the character lighting look like the world lighting it didn't occur to me you might want it to be different on purpose.  PURE used it to do rim lighting, for one thing, and PoP used it to give characters a higher ambient light.
Sofi wants to play WebKinz now, so more later.

I had some trouble seeing the Xbox Live Arcade Awards Voting thingy on my xbox and had to call Bill to have him point it out for me:  when you're in the xbox dash, go up to the Game Marketplace row, and it's a few panels over --  "The 2008 Xbox LIVE Arcade Awards."  Download it and then you can run it from your game library.  Vote Schizoid for a better tomorrow.  (And it looks like you can vote once for each LIVE profile on your system, even if they're silver.  Stuff that ballot box!) 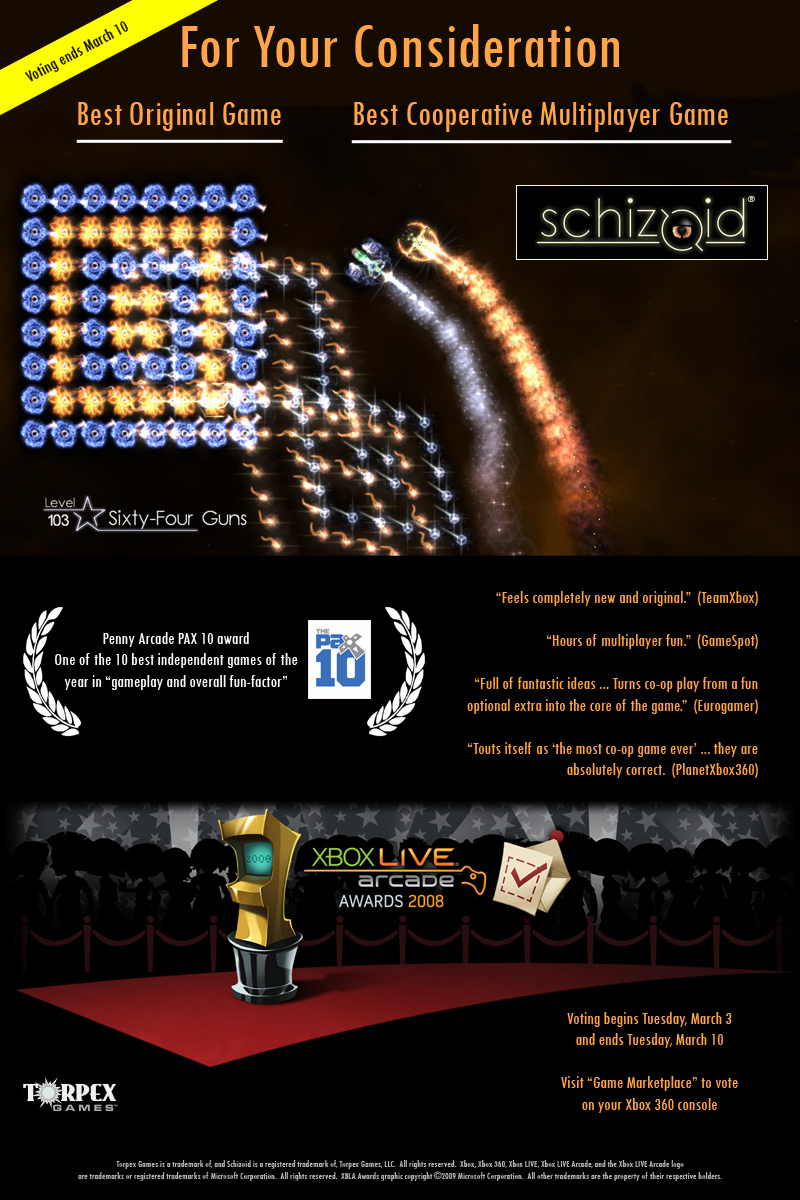